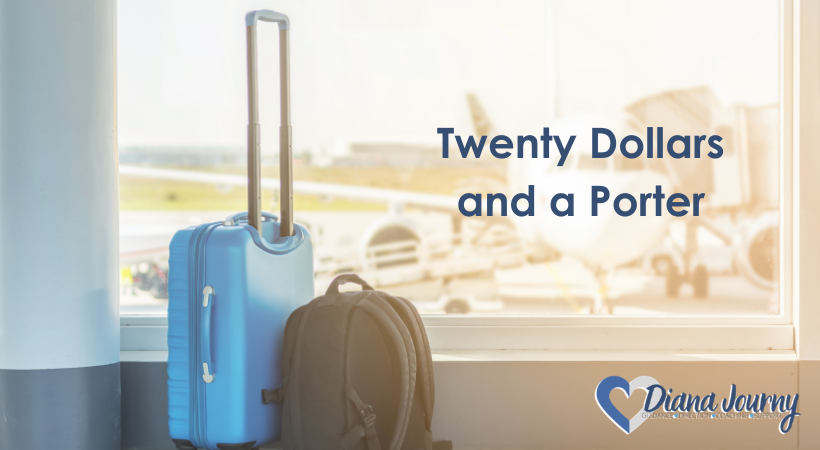 A while back, I flew out to spend a week with my daughter Mia, her husband Sam and their first baby Aiden—then only two weeks old. I was so excited to meet my newest grandson! Having a newborn in the house meant there would be some big changes and adjustments for their little family. I wanted to help smooth the way for them, so I spent my time helping in any way I could, from organizing Aiden’s room to soothing him when he was crying to let his parents get a little extra sleep. It was sweet to be together and make lovely memories. The week passed quickly and the time came for me to head home.

Before my daughter took me to the airport, we met Sam for lunch.  My grandson slept while we enjoyed our food and savored the precious quality time. When we glanced at the clock, we couldn’t believe how fast lunch had been. We had to get me to my flight! Sam quickly paid the bill and I threw in five dollars for the tip. As we were heading to the car, we realized Aiden needed a diaper change, so we stopped one more time. Finally, we were off to the airport. As we got close to the airport, I realized I would need to check my bag outside if I wanted it to make the flight with me; there wasn’t enough time for me to check my bag at the counter.  Because I had thrown in a five for the tip at the restaurant, I realized I only had a twenty-dollar bill left. Now I had a dilemma; how will I pay the porter? I always tip porters but that amount seemed like too much.

My mind was vacillating. Should I tip him or not?  After all, I only have one bag. Surely not tipping once won’t be that bad, right? Or maybe I can ask for change? I knew that if I gave him the cash I had, I would not have any money for the rest of my trip! I had a layover on my way home and I would probably want a snack. A twenty really did seem overly generous for one small bag. However, time was of the essence so I had to make up my mind quickly.

Mia dropped me off and I went up to the curbside check in. The porter took my bag for the fast process and assured me that my bag would make the flight. Now what should I do?

I stood for what felt like an eternity, still unsure what to do, to just give him the money or ask for change.  I looked him in the eyes and simply handed him the twenty-dollar bill.  As he took it and it dawned on him what was happening, his face softened and there was sincere appreciation in his eyes as he said, “Aw, thank you, Miss!”

As I turned to walk away, I said, “No, thank you”.  Even though I initially struggled with what to do, there was a valuable lesson for me to learn that day. Sincere appreciation is more valuable than any monetary value.  Giving away my last dollar was worth the cost. The simple act of giving the porter an unexpected tip made his day and his reaction made mine. Lighthearted, I walked away. Sure, I had less money in my pocket but my heart was filled with pure joy, knowing I had given an unexpected gift. The reward was in the giving and it was more valuable than the worth of the bill.