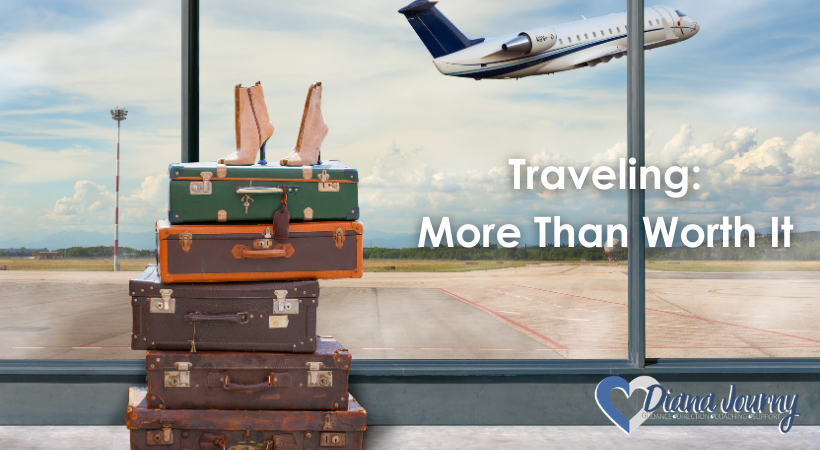 Usually I enjoy occasional travel, but last year was very different. Not only did I spend more time traveling than most years; there was an unprecedented number of delays.  I’ve come to expect holdups from snow and ice when flying in the winter. However, I mostly took flights in the summer, so it was odd and unexpected. I wondered if it was something to do with the weather or something more complicated like mechanical problems. Regardless of the reason, I found traveling that year extremely tiring and frustrating, especially as I had no control over the issues and interruptions. There were times I felt like there were more downsides than upsides to traveling.

In June, I’d been in Colorado for a retreat with my business coach.  From Colorado I was scheduled to go to Texas to watch my 2-year-old grandson, Charlie. My son Adam and his wife Marie were heading to Ireland and had asked me to stay with him. My schedule allowed me to be there a full day before they were to leave, giving me time to make sure I knew his routine and schedule. It had been several months since I had seen Charlie and I was looking forward to having one on one time with him.

The day of my departure started early because my flight was at six. Even so, at the airport the lines were huge. Soon I heard mumblings from the people around me that all morning flights had been canceled. I quickly got in line to check in.  After a long wait, I finally got to the counter—only to be told I couldn’t get another flight for two days. Panic set in. Wait, that won’t work for me.  Obviously a two-year-old can’t stay by themselves waiting for Grandma to get a flight. Not to mention how hard it would be for Adam to change the international flights. The agent at the counter could see my desperation and she tried all their outgoing flights and other airlines before resorting to calling a supervisor to help.  Finally, they got me on a Delta flight leaving the next day. Taking a deep breath and finally feeling relief, I left the airport.

It had been a stressful morning. The house where I was staying had a field behind it with horses, so I decided to sit outside and enjoy the quiet and lovely view. As I sat there, one of the horses came up to the fence. I was intrigued by its beauty and got lost in the moment looking into its gentle brown eyes—when my phone rang and startled me. It was the airline calling to inform me that the flight I had been rebooked on was canceled. I spent the next several hours talking to anyone who might be able to help me find a flight that would get me to Texas in time. Exhausted and stressed, I imagined my Charlie sitting in his crib all by himself with no one to care for him. This just can’t happen, I’ve got to do something! Can I rent a car and drive?  Drive to Texas or a city with a bigger airport? I was passed on to a supervisor. Finally, some good news! I was once again rebooked on a third airline. Tired but very stressed, I was unable to sleep the night before my flight.  Would there be another delay, leaving me stranded in Colorado?  To my relief, the next morning everything went off without a hitch. I landed in Texas on time, emotionally spent but thrilled I made it.

I had a good night’s sleep, all of the weight of the last few days melting away. In the morning, I went into Charlie’s room and his face lit up. He put up his hands and reached toward me with a huge smile on his face. I lifted him out of his crib and his little arms wrapped tightly around my neck. As I held him close I felt so deeply glad that I was here. Even with all the travel mishaps, coming here was well worth it. He was worth any inconvenience.

I spent my days with my grandson reading books, building towers, and going for walks. He had an obsession with the lawn guy. On the days the crew came, Charlie had to see them out the window. On our walks he would bring his toy lawn mower with him. I’m sure all the neighbors could hear us coming. I laughed to myself as I wondered if one day he would be in the lawn maintenance business. It felt good to move fully from frustration to joy as I appreciated every minute.  Spending time and loving on this little guy was definitely worth it!

Regardless of the annoyances that my flights presented me with last year, I wouldn’t have changed any of it, because that would have meant forfeiting the experiences. I went to some really beautiful places: Hawaii, Colorado, Ft Lauderdale, and New York City. I also got to be with friends and family at my alma mater, Washington D.C., Ohio and Texas.  Traveling allowed me many privileges, but the biggest reward by far was spending time with my children and their families. Nothing melts my heart more than to have one of my grandchildren run to me with their face lit up yelling “Grandma!”