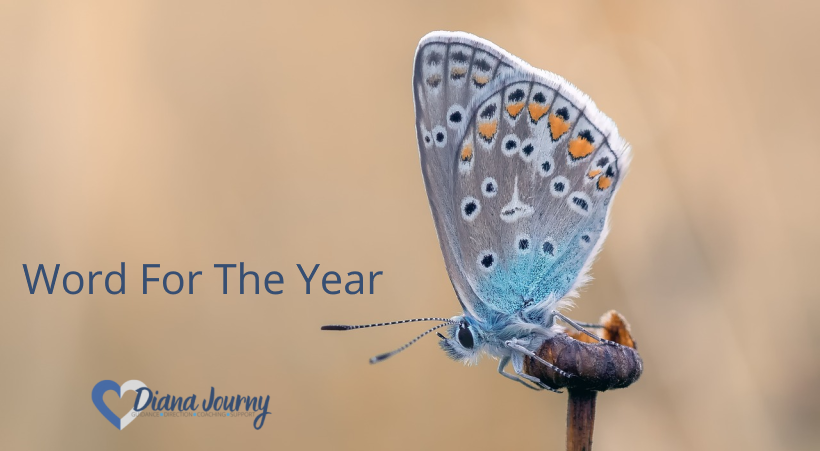 For several years now, I have chosen a word for the year instead of making New Year resolutions.

These are my words for the last several years.

Why A Word For The Year

While there are many reasons that resolutions don’t work, I’m going to focus on why a word does work.  I like many others have made a list of resolutions the start of each year.  I haven’t been followed through on those resolutions.  In fact, for many years I have carried the same resolution over to the next New Year.  After many years of been stuck in the same rut, make resolutions, don’t achieve them, carry them to next year, repeat.  I decided to try something different.

Doing some research, I discovered the value of choosing a word to focus on.  Putting your focus on a single word, gives you intention and direction and gives me the power to change my life.  In trying it for one year, I saw how much possibility there was by focusing on one word. And that is why I continue to choose a word for each year.

So, how does one choose a word?  Let me share how I and my husband Tim do it each year!  On January, 1st of each year, Tim and I get out flip charts and write out what we accomplished the previous year, what we had wanted to accomplish but didn’t. Then we move on to the New Year, what is it we want to accomplish?

Built On The Word Before

What I have learned is that each year, my word has built on the word before.  For instance, one year my focus was Just Enough, the next year was Embrace Change, followed by Evolved for this year.  It’s been a progression.  There were circumstances in my life that I needed to accept that Just Enough was enough.  Once I had grown in acceptance, I was ready to Embrace Change.  I really couldn’t embrace the change if I hadn’t accepted that just enough was enough.

Life had taken unexpected twist and turns that was leaving me feeling I was not enough, I didn’t have enough, and the list goes on.  Going through the process of resting in enough, I was able to move on to embracing change.

My life was in a season of change and it was something I was not prepared for or even wanted.  I started last year out with the word Bloom, but the truth was I couldn’t Bloom if I were stuck in the frustration of the changes that I was living. To be more accurate, I was fighting the change.  I specifically heard; you must Embrace Change before you can Bloom.

Last year, I accepted the new season I was in and embraced the changes in my life.  Was it easy? No! We all have expectations of what we think our life will look like.  It’s hard to move away from expectations and embrace the reality. I don’t think I’m any different than you.

After a year of Embracing Change, I am ready to move into my new word, Evolve. To me Evolve means, gradually develop into the person God has designed me to be.  To gradually develop my business.  I’m prepared for the process.  When I look back on New Year’s Day, I look forward to seeing how I and my business has Evolved.

What will your word be for this year?  Where will you focus be?

Proverbs 29:18 KJV “Where there is no vision, the people perish…”